Giving It Her All

For the first time in over a year, I got a call from a client in labor BEFORE her due date!  And it was even a day that her doctor was on call.  (These two things rarely happen, especially simultaneously.) It was 1:00 in the morning on Monday the 24th.  My client's water had broken about an hour or two before she called, and her contractions were about 10 minutes apart.  I encouraged her to try to sleep in between and to call me when things picked up.

At 4:00 am contractions were intense and between 4 and 5 minutes apart, so we met at the hospital about 30 minutes later.  Mom was 4 cm, and I could tell she was well in the throws of active labor. We spent several hours utilizing many comfort measures: music, massage, pelvic tilts, the birth ball, and even the ice roller.  The ice roller (a plastic rolling pin filled with ice water) was the trick, and gave mom some much needed pain relief and helped her cool down.  Labor is hard work, and most women become pretty warm.  During one contraction, mom asked "How does anyone do this without a doula?!"  :)

Mom was checked again at 6:30 and was 6 cm.  Very quick progress for a first time mom. Contractions were coming every 3 minutes and were very intense.  Mom was also exhausted from laboring all night, so she opted for an epidural to get some much needed rest and relief.  Her iv was driving her crazy, and she actually ripped it out!  Thankfully, the second iv felt much better, and mom had her epidural by 7:30 am.

Granny stopped by around 10:30 to give a hug and some encouragement.  And by 12:00, mom was dilated to a 9.  Baby was starting to engage in the pelvis and was in a great position for birth.  It seemed like the perfect scenario!  Mom was checked again at 2:00 and was about 9 1/2 cm, meaning that just a small portion of the cervix still needed to dilate.

Even though mom had an epidural, we were proactive about helping her labor progress while she rested.  Mom continued to utilize music and position changing in between naps.  Bad news came at 5:30 pm, when mom was checked again and found that her cervix had gone down to 8 cm.  Very discouraging, to say the least.  The doctor put in an IUPC (Intrauterine pressure catheter) to assess how strong the contractions were.  Turns out, they weren't very strong anymore, so mom was given some pitocin to help strengthen the contractions and finish dilation.  And it worked!

By 8:50 pm, mom was complete and baby was at +1 station, meaning it was starting to enter the birth canal.  The urge to push took a while to come, which is common.  But by 10:00 pm, mom was feeling the urge to push and was vocalizing and pushing during each contraction.  Dad fed mom ice chips in between each contraction.  Baby was making progress, but it was slow progress.  Mom was tired and getting discouraged with the lack of progress, but she kept digging deep inside herself the find the strength required of her. 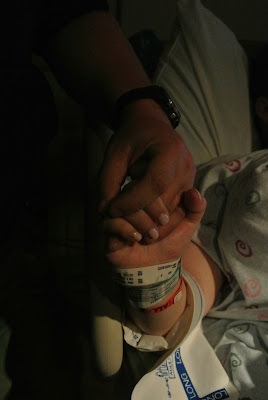 By 1:00 am, there still wasn't much progress, despite hours of pushing.  The doctor asked mom if she would like her to try using the vacuum, to help encourage the descent through the birth canal.  The idea sounded great.  Anything to get things moving along!  After two contractions, it was clear to see that even with the help of the vacuum, this baby was just not moving down the birth canal, and it was decided that a cesarean would be the best option at this point.

Very discouraging and disappointing to hear after laboring and working so hard for over 24 hours. Most women do not want a cesarean, but there are women who will need them, and no amount of preparation can change that.  But there is peace that comes when you know you really tried everything. 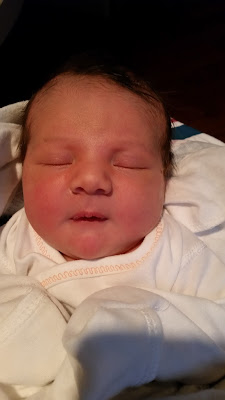 His mom sure gave it her all.  But even when birth is hard, discouraging, and even disappointing, the prize at the end sure makes it worth it!