Hanging out at 41 weeks, my latest client reluctantly agreed to an induction on Friday evening.  After processing a change in birth plan and coming up with a new plan, she arrived at the hospital to discover that it was too full that evening, and her induction was put off until Monday morning!

But her baby had different plans.  Her water broke around 10:30 am Sunday morning.  Along with it was meconium, so off to the hospital they went.  When she arrived she was 1 cm dilated and about 70% effaced.  Baby was high and contractions were mild.  Around 2:30 that afternoon, some pitocin was administered to try to get things moving.  But bay didn't love the pitocin and labor wasn't progressing.  So at 2:00 am on Monday, they decided to just turn off the pitocin and try to get some sleep.  (An almost impossible task at the hospital!)

I heard from my client at 6:00 am Monday.  They were about to start the pitocin again and she was worried about coping with pain due to her exhaustion.  My back up doula met her at 8:00 am as I had a morning conflict.  She texted me at 10:00 saying my client was now 4 cm and 90% effaced, and that she was thinking about getting an epidural soon.  I felt bad for missing all the action!  By 11:00 mom was comfortable with an epidural.  I raced to the hospital as fast as I could.  When I got there shortly before noon I was shocked to find out that my client was now 9 cm!  I had missed almost everything! 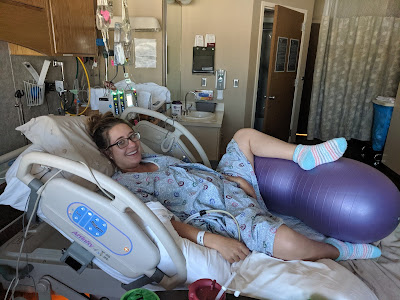 Mom was in good spirits when I arrived.  We chatted for a while and worked on positioning to help baby descend.  Then mom tried to nap again.  She had a great playlist going with tons of Josh Groban, my fave!

At 2:00 mom was checked and was complete!  We reviewed pushing techniques for breathing and positioning.  And by 3:15 mom was pushing! 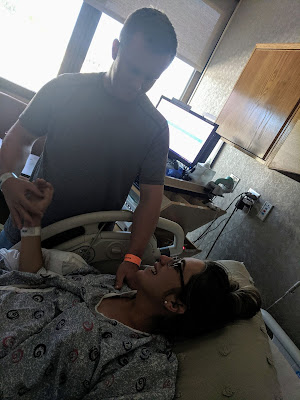 Pushing is really exciting at the beginning, but that excitement can quickly wear off when moms discover how difficult it can be and how long it can last.  This mom had the best epidural ever though.  She had so much control over her legs and was able to utilize a ton of different positions.  We did hands and knees, side lying, squatting, semi-reclined, you name it. 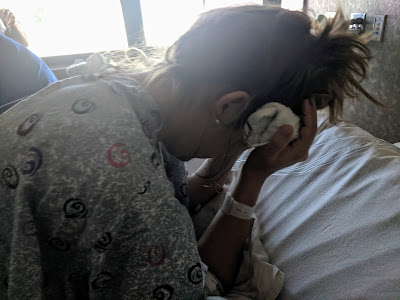 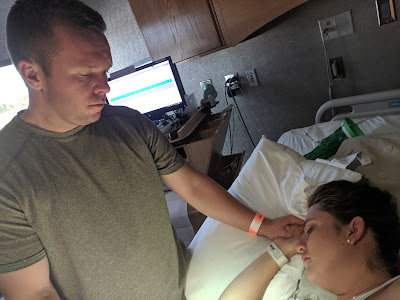 At 5:30 mom was exhausted and her tissues were really starting to swell, and progress was minimal.  So we decided to rest for a while.  She pushed her epidural button and went back to deep breathing.  Mom was also starting to show signs of infection.  Her skin was very warm and she started having uterine pain, so antibiotics were ordered. (Once the water breaks, women are at an increased risk of infection.)

Mom was also hungry and she daydreamed about eating a cheeseburger and chocolate milkshake once her baby was born. 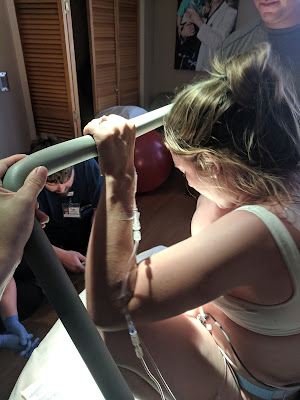 Shortly after 6:00 pm we started pushing again.  This mom was determined and we tried everything.  All the positions and this time we added tug-of-war with a sheet to help her really focus her energy down.  She was so freaking strong.  This yoga master was amazing, yet the baby was still hardly moving.

There were several residents supporting the birth, and I really enjoyed working with them!  They were so easy to talk to and asked me a lot of questions about positions and my take on things.  It was such an awesome collaboration, I wish every birth room could be like that!  There was one point it looked like mom would deliver on her hands and knees and the resident doctor was asking me to tell him about my experiences with that position!  He had never seen a birth that way, but was so open to learning about it and supporting it.  So awesome. 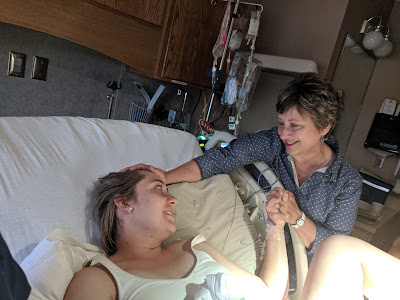 At 7:00 grandma arrived and brought with her encouragement and love. 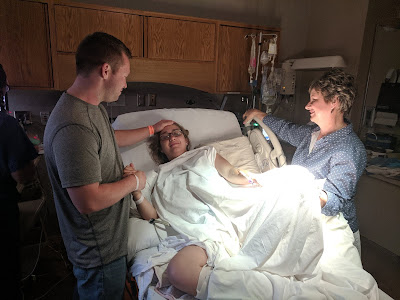 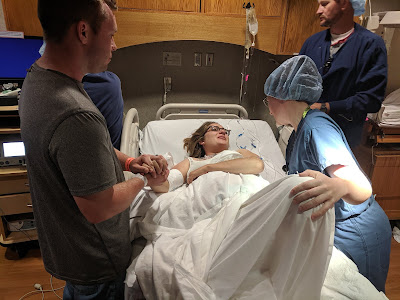 At 7:30 a new OB came in to evaluate and felt that the baby was still too high to try a forcep or vacuum assist, and felt that a cesarean was the best option at this point.  This news can be so disappointing after hours/days of laboring and pushing, but sometimes it is the only way.  Mom said she was too tired to feel emotional about it.  Dad wasn't.  After his wife was wheeled in the OR, the emotions were strong.  His father in law offered him a religious blessing and blessed him to feel Christ's love, peace, to be strong for his wife, and to feel the love from his heavenly and earthly parents.  A feeling of peace entered the room.

Shortly thereafter though the nurse came into the room crying.  She was so sad to tell the dad that he would not be allowed into the birth.  Mom was not responding well enough to the anesthesia and would have to be put under for the cesarean.  It was a new disappointment to deal with and emotions quickly returned. 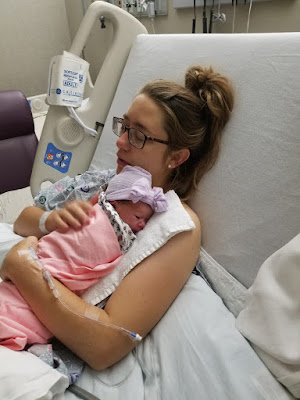 During the cesarean, the doctors discovered a uterine abnormality that they believe swelled during the labor and prevented the vaginal birth.  It's nice to have answers, but it's even nicer to finally hold your baby!  I'm sure this mama is exhausted with sore muscles all over.  She worked so hard! 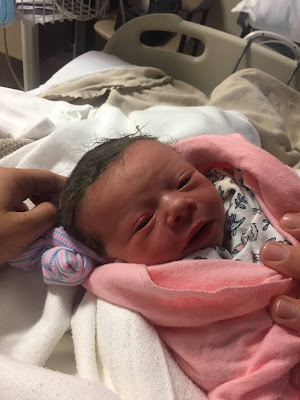